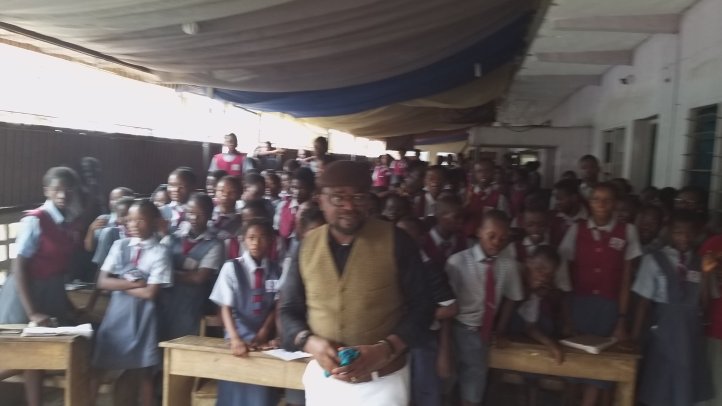 Happy New Week to you all dear STANDARDS BEARERS. Sure you had a great weekend.

I hope you have found the last two installments of this series worthy of the time invested so far.

Honestly speaking, it was none of my intention to drag this discussion this far. I must have actually underrated how deep this message has taken root in me. Please pardon this long post, which has come to you in three long parts.

At IVY Premier College, Mushin and Queen’s College last Thursday, we taught the precious young people to SHOW UP, STAND OUT and SHOW OFF as the precursor to taking responsibility for their PERSONAL SAFETY and SELF-PROTECTION.

Another important anchor of the message is that complexities of the 21st century have become intimidating threats to both young and old from the Third World to the First World and the only visible safe haven is one’s personal POSITIVE VALUE SYSTEM. This you must endeavour to deliberately define and develop. This undertaking does not also wait for the day of adversity. Personal POSITIVE VALUE SYSTEM is worked at in the day of less pressure for the day of intense pressure. The Holy Writ says ‘if you fail in the day of adversity, your strength is little.’

We showed these precious young people that the complexities of the 21st Century and it’s dire challenges, which is further intensified by the diactates of the Fourth Industrial Revolution are as strong in their impact on them as the weakness of their value system and as weak as the strength of the their character.

By introducing them to POSITIVE VALUE SYSTEM, we also shift their attention from everything that is going wrong like drug and substance use and abuse, sexual immorality and abuse, violence and bullying, terrorism, addictions of any and all kinds. We focus their attention on the opportunities inherent in the 21st Century and how to access same through the right behaviour and thinking. We believe that when our precious young people get to be exposed to the opportunities inherent in the 21st Century and they shown how to access same, the evils of the century will become less and less attractive to them. We helped them to understand that it may very well be difficult times to be a young people, it is much more the best time to be a young person because the opportunities inherent in the Fourth Industrial Revolution are countless and POSITIVE VALUE SYSTEM is the MASTER KEY.

This is the message in a nutshell. #ThisisMyStory that those precious young people leaped with palpable joy at the hope inherent in the message. We believe we unlocked their curiosity for good… #ThisisMyJourney that we move from one Child Focused Organisation to the other spreading the message to the glory of God Almighty and #ThisisMyLesson that to change the world of our precious young people and help them to be BENEFICIARIES of the opportunities of the 21st Century instead of being victims is a possibility if we try to change the tide of the prevailing and popular message of PARANOIA and embrace a COUNTER CULTURE, undergirded with the BEST INTEREST OF THE PRECIOUS AFRICAN CHILD in the 21st century.

We look forward to being your guest soon, exposing the PRECIOUS young people under your watch and care to the exponentially beneficial message of the #SAFE4MEMovement through our #SAFE4MEEncounter or you may want to subscribe and expose them to our monthly comic, #SAFEVille.

The revolution is here…Who will stand up and be counted in the BEST INTEREST OF THE PRECIOUS AFRICAN CHILD.

Do have an INSPIRED week dear STANDARDS BEARERS.

Yours IN THE BEST INTEREST OF THE PRECIOUS AFRICAN CHILD,
Taiwo AKINLAMI
The Preacher